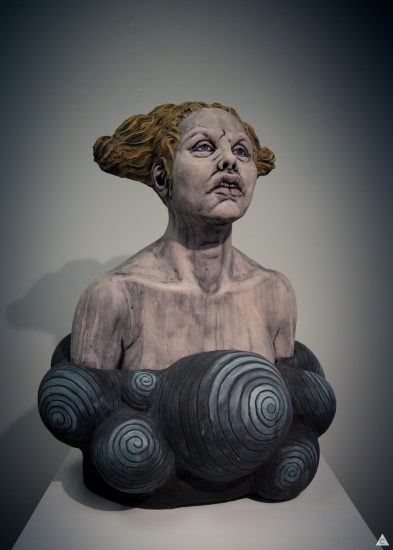 As part of Greater Tacoma Community Foundation’s celebration of the 10th Foundation of Art Award, attendees of the Third Thursday reception at the Spaceworks Gallery exhibit on September 21, 2017 voted for their favorite piece among this year’s awardees. Heather Cornelius received the most votes, earning a prize from Museum of Glass (MOG).

Heather will receive up to two days in the MOG Hot Shop, access to the MOG team of skilled and talented glass artists, the chance to experiment with glass as a medium, and coverage on the MOG live stream. In response to the news of her win, Heather said, “I’d like to thank everyone for supporting my work. I am honored to receive this award and residency. It will be a true delight to work with the incredibly talented team at the Museum of Glass.”

In offering the prize, Museum of Glass spokesperson said, “We are pleased to be a part of the cultural community in Tacoma. We are proud of the way the City has embraced the arts and hope the People’s Choice Award will encourage continued collaboration among the cultural institutions in our area, as well as build upon the sense of community for the artists who practice in the region.”

The Foundation of Art Award was first given in 2008 to honor visual artists living and working in Pierce County. The previous nine Foundation of Art Award recipients were Chris Sharp in 2008, Jeremy Mangan in 2009, Lisa Kinoshita in 2010, Jessica Spring in 2011, Oliver Doriss in 2012, Shaun Peterson in 2013, Elise Richman in 2014, Christopher Paul Jordan in 2015, and Sean Alexander in 2016. Artwork created by past awardees for GTCF is also be on display at the Spaceworks Gallery show.

The 10th Foundation of Art Award exhibit will be on display at Spaceworks Gallery through October 19, 2017. The Gallery is located at 950 Pacific Avenue, Tacoma, Suite 205. Hours are Monday through Friday, 1pm-5pm.