Housing Equity Starts With Those Most Lacking Equity

A Tacoma/Pierce County Habitat for Humanity Homebuyer, Denise, cuts the ribbon at her new home’s dedication

Kiara Daniels remembers what it was like to buy a home in the quickly gentrifying Hilltop neighborhood where she grew up, “There were so many tears. First, I made not-enough money. And then I had to go out, hustle, and try to make more money.  Then, I had to worry about making too much money to be disqualified from the program. I thought, ‘This is not going to happen.’ It was just a roller coaster every moment.”

But I had this personal touch of this woman who looks like me, and who was committed to another young woman being able to purchase a home.

Kiara is a Tacoma City Council Member. As a Black woman, the barriers she faced on her home-buying journey are not unusual. “Credit was my very first step. It took me 2-3 years to get my credit score where it needed to be, and when I did, it didn’t even matter because I had over $100k in student loans that I was told would stop me from ever buying a home. That was my second barrier. And then the third barrier was I just don’t make enough money to purchase a home in my neighborhood. There are no starter homes for our nonprofit, service industry, essential workers – most who look like me. There are no homes available for people who cannot afford a $500,000 mortgage.”

Kiara managed to join a program where a personal counselor helped her through those barriers, “her job was just to get people through the program. If I didn’t have her going back and forth with me about numbers for over a year – and then matching me with a house, and then going through the process of every single ‘no’ that you get along the way, I would have never made it to the end. But I had this personal touch of this woman who looks like me, and who was committed to another young woman being able to purchase a home. She really stuck with me and didn’t give me the ‘no’ the first time and helped me understand how I could really do this.

“I would say that I am one of the most determined people that I know. I understand systems and I have figured out how to be resilient within them. I have a master’s degree in public administration. So, this should not be rocket science, right? I only imagine how it would feel to be someone who doesn’t have the same circumstance.”

There are a number of systems that have been truly stacked against Black home buyers for decades.

According to Civic Common’s Pierce County Scorecard, while overall homeownership has increased slightly for the region, there was a sharp decline in homeownership rates across all races besides white people in 2020. In 2021, the City of Tacoma released a homeownership disparities study that showed:

Credit barriers were a major factor in the City of Tacoma’s homeownership disparities study:

The data from City of Tacoma and Kiara Daniels’ home buying experience align with what the team at Tacoma/Pierce County Habitat for Humanity see. (Kiara Daniels is a board member of Tacoma/Pierce County Habitat for Humanity). CEO Maureen Fife shared, “Most of our home buyers are people of color. Frequently, when people come to us, they will have bad credit, not enough credit, or no credit. They may have medical debt or school debt. Black individuals have the highest rate of educational debt. That gets in the way until you can get that paid off. There are a number of systems that have been truly stacked against Black home buyers for decades.”

Maureen points to systemic barriers rooted in racism like credit and mortgage restrictions and redlining, “Systems created by government, backed by government, and paid for by taxes intentionally worked against Black families. When you talk about building generational wealth and the transfer of wealth, that was not open to them.

“Lots of home buyers get their down payment from grandma or from some other family member. Well, if you’ve come from a family where home ownership was not an option, that’s not going to be an option for you, either.”

The City of Tacoma disparity study included interviews with local prospective home buyers that underscored the attitudes and experiences Maureen has seen through Habitat for Humanity:

Many interviewees described the ways in which historic racism in lending and housing policies directly and indirectly contribute to present-day displacement challenges impacting Black residents and their ability to keep their homes.

Beyond the systems of discrimination themselves, the narratives associated with this history continue to impact many Black families’ approach to planning for homeownership, with many believing it perpetually beyond reach.

Additionally, respondents described impediments to homeownership access such as rising home prices, low inventory, and challenges associated with income, credit, and the lack of wealth. Interviewees spoke to the need of providing education, counseling, and wrap-around services in addition to financial support.

Tacoma/Pierce Habitat for Humanity has joined other housing organizations, nonprofits, housing developers, and philanthropies to improve Black homeownership rates in Pierce County as part of a regional Black Home Initiative. Partners in the Black Home Initiative will address Black home ownership inequities with a cross-sector approach that includes obtaining land, creating new funding mechanisms aligned with the needs of developers, and targeting a variety of housing types and methods of sale.

Michael Brown is the Chief Architect of Civic Commons, a regional civic infrastructure holding the center of the Black Home Initiative. He explained why focusing on improving home ownership rates for low-to-moderate income Black individuals and families is important for everyone, “Take a look at some important indicators: the racial wealth gap, overall household assets, and then home ownership rates. When you disaggregate data, you see Black households are at the bottom in all three indicators. My approach has always been a targeted universalism approach. We get it right for those furthest from opportunity and then everyone benefits because you had to tackle systemic and structural components that have been in the way to opportunity, to home ownership, to wealth, to assets.”

One way to understand the idea of targeted universalism is the example of creating curb cuts in city sidewalks to provide a ramp rather than a concrete step. Michael explained, “the curb cut came from an understanding that it was difficult for people with disabilities, or those in wheelchairs, to use sidewalks. The curb cut was a way of facilitating easier accessibility. But what has turned out is that parents who have kids in strollers, kids on bikes, people on scooters, and others also benefit. There is a universal benefit. A very targeted approach created benefit for everyone as a result of it.”

This targeted universalism approach is at the core of the Black Home Initiative plan. Michael shared that by focusing on Black home buyers and, “working together across sectors, and with community, we have built a new system that better supports low-to-moderate income prospective homeowners.

Now that we have pulled the curtain back and realized that specifically Black communities and individuals had systems stacked against them intentionally by the government, the ball is in our court. What do we do about that?

“I didn’t say just Black homeowners. I mean, we have to start there because the data points tell us where the greatest needs are. But if we get the system right, and we are able to support 1,500 new, Black, low-to-moderate income homeowners, the system is going to work much better for low-to-moderate income homeowners of all races. For me, that is the ultimate goal. We have, in partnership, built a system that is seamless and that is responsive to the needs of those who want to be homeowners.”

Seth Kirby, Greater Tacoma Community Foundation Chief Impact Officer, sees this kind of system transformation approach as a catalytic role for philanthropy, “Like many communities of Tacoma’s size and diversity, homeownership is one of the primary pathways for generational wealth. GTCF and other aligned philanthropies can provide greater and more flexible funding to catalyze larger system investments. GTCF is establishing an Equitable Housing Fund to support the work of Black Home Initiative partners locally and regionally to identify existing community efforts for strategic investment.  By intentionally working together, we can ensure Black Tacomans have equitable pathways to homeownership.” 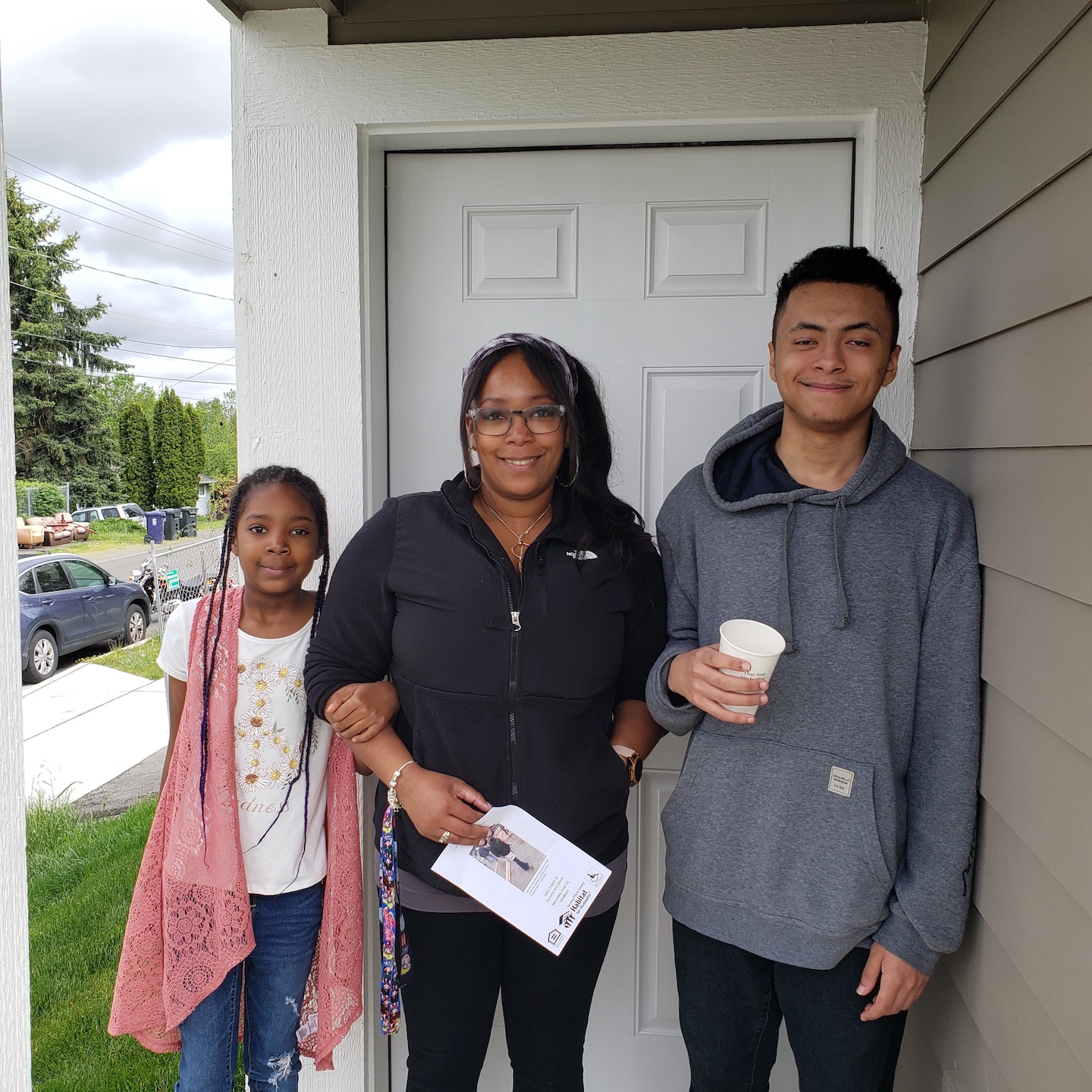 A Tacoma/Pierce County Habitat for Humanity home buyer, Christina, with her children

Back at Tacoma/Pierce County Habitat for Humanity, Maureen Fife sees the focus of the Black Home Initiative as the right thing to do, “Now that we have pulled the curtain back and exposed how Black communities and individuals had systems specifically and intentionally stacked against them by the government, the ball is in our court. What do we do about that? We can’t just ignore that it happened and move on. The American dream isn’t the white American dream; it is the American dream for everybody. So yeah, it’s soul-searching time.”

Tacoma City Council Member Kiara Daniels observed the difference home ownership has made for her family – and what it means for the broader community, “I’m able to provide a place for us to gather. And when we don’t have a place to do that, then we simply stop gathering. When we can’t gather, we don’t have that sense of place and belonging, and I know what that does for safety and overall quality of life in our community.

Donors interested in supporting access to equitable housing in Pierce County have many pathways. Greater Tacoma Community Foundation launched an Equitable Housing Fund to support the Black Home Initiative and other Pierce County community efforts to transform systems for greater housing access. Donors are also encouraged to give directly to the Black Home Initiative at Civic Commons and to local organizations working in partnership.

Two Leaders, One Voice on the Racial Homeownership Gap – Op-Ed by T’wina Nobles, President and CEO of the Tacoma Urban League & Senator for the 28th Legislative District of Washington State and Maureen Fife, CEO Tacoma/Pierce County Habitat for Humanity (October 16, 2022)

A NOTE ON CAPITALIZATION:

In this story, the word ‘Black’ is capitalized when referring to race but the word ‘white’ is not.

There are many editorial opinions about the capitalization of ‘white’ and ‘black’ when referring to race.

Both the City of Tacoma homeownership disparities study and Civic Commons follow the AP style, capitalizing ‘Black’ but not ‘white’.

GTCF honors the preference of people and communities, so this story uses the capitalization style of those groups.