Filed Under: Civic Engagement,Philanthropy - Posted @ 11:54am 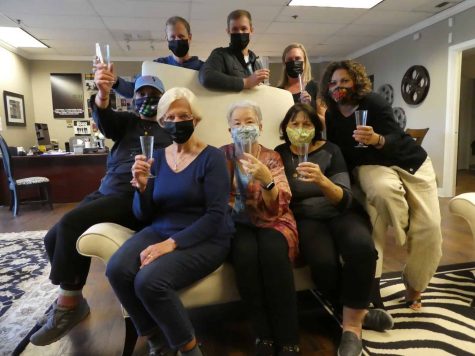 Gig Harbor Now board members and staff celebrate the launch of the news organization.

Local journalism can make the difference between getting involved in community solutions or being caught off guard by events that arise from otherwise unseen issues. That was the case following a recent article from the nonprofit news site, Gig Harbor Now (GHN).

Newcomers could see how beautiful the view is, but I wanted them to celebrate the fabric of the community, and to be engaged in it.

Residents in Gig Harbor raised a flag on a known but unfunded security issue at Discovery Elementary. The school was built in 1981 with an “open-concept” design that offered open spaces and no interior doors. The 40-year-old experimental learning approach presents a hazard in an era of school lockdowns.

Discovery Elementary in Gig Harbor is an example of the “open concept” school design that was popular in the 1980s.

GHN ran a story on the residents’ concerns about the school, which brought greater community awareness and engagement. Calls and letters led to a public meeting with district personnel, including one grateful teacher, who was quoted in a follow-up GHN article, saying, “This is as far as we’ve ever gotten! So, thank you!”

Just 10 months after they ran their very first article, GHN editorial staff report similar engagement resulting from stories on everything from salmon streams to traffic roundabouts.

The GHN news site was born when a group of die-hard local journalists set their sights on finding a way to revive the Harbor’s local news voice. They approached long-time Harbor resident and former State Representative Pat Lantz. Pat joined in the effort to resolve “feeling bereft about the fact that newcomers could see how beautiful the view is, but I wanted them to celebrate the fabric of the community, and to be engaged in it.”

With a trusted core of advisers, expert volunteer staff, and initial grants from GTCF and Gig Harbor Rotary, Gig Harbor Now launched. Its website went live on September 3, 2021. Fundraising then shifted into high gear with GHN’s participation in NewsMatch, a program supported by the Institute for Nonprofit News (INN). The local community generously responded with over $50,000, and matching funds of NewsMatch boosted that contribution by an additional $17,000.

This initial affirming wave of philanthropic support told the board that the Gig Harbor community understood the positive impact of a local news source and were willing to help fund it. The NewsMatch contribution confirmed that opinion. For Pat—now GHN’s president—and board treasurer Jenny Wellman it is solid assurance that the INN funding model of community donations and philanthropy, along with grants and sponsorships will lead to long term sustainability.

Nationally, the Knight Foundation pledged $300 million to building the future of local news and information in 2019, saying news outlets “are essential for democracy to function.” Locally, news organizations that have traditionally relied on advertising dollars have introduced their own local media funds. The Tacoma News Tribune opened the South Sound Impact Media Fund at GTCF to support their journalism “labs” – or reporting teams – to bring awareness, understanding, and solutions to the most important issues in our community.

If that sounds a lot like public media, that’s because it is. National Public Radio has been delivering community-supported media for more than 50 years. Local NPR affiliate KNKX has something to say about traditional media organizations adopting their funding model.

“There are enough funders to go around!” says Mary Dunaway, KNKX Executive Director of Development. She is enthusiastic about how community support for local journalism is trending: “In a world of shrinking news organizations and those being bought up by large ones, public media has thrived because our philanthropy business model works.”

At KNKX, Mary describes what’s behind those on-air fund drives: “Every year, 30,000 people give an average of $150. That sustains our operations, and then we look to philanthropy—securing larger gifts from individuals, foundations and grants—to fund special projects.” GTCF joined with other local funders to support a Tacoma-focused podcast coming out this fall. 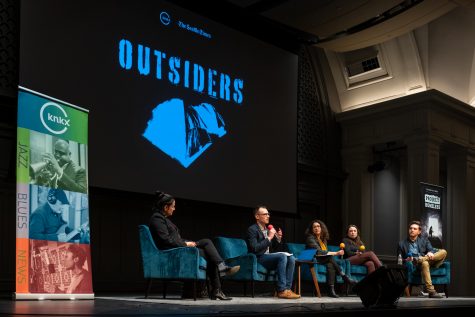 A KNKX listener event for the Outsiders podcast.

There is an urgency and a necessity to local journalism if we’re interested in the future of democracy, in maintaining any kind of coherence and in making home home.

“And that is the point for local journalism,” Mary adds. “To create more informed citizens, which leads to more engaged communities. Democracy needs journalism and journalism needs philanthropy in order to survive.” She lists several examples of KNKX reporters’ work leading not only to greater public awareness and engagement, but also to policy change and new legislation. In the case of the death investigations series, Mary says reporter Kari Plog was educating the legislators she was interviewing about the fact that there was even a problem.

“So at the heart of what we’re talking about is the role journalism can play in uncovering local issues and telling stories that aren’t getting the light of day,” Mary says. “You can’t do that if you don’t have an independent local news team.”

GTCF Chief Impact Officer Seth Kirby shares why local journalism is a critical focus for funders interested in a thriving community, “As someone who grew up in a small community, being able to see myself represented in the media gave me a sense of the larger world around me and helped me understand possibilities for my future. Here in Pierce County, local media shows how national issues affect us and how we can make a difference in our communities. GTCF is resourcing and funding local journalism because of how it supports and enhances relationships and connections across networks and issues. When donors support local journalism, people grow and develop perspective.”

As Pat and Jenny found out with Gig Harbor Now, you can’t have a local news team without funding. Pat puts it this way: “There is an urgency and a necessity to local journalism if we’re interested in the future of democracy, in maintaining any kind of coherence and in making home home. Civic engagement means everyone is invested in the product that is the community.”

If you’d like to learn how your philanthropic giving can support greater media impact in your community, strengthening community voice and civic engagement, contact GTCF’s Philanthropy Team.