IBJ ACES Design Challenge participants created design challenges by linking back to the past to combat contemporary community concerns.

As racial and political tensions were at an all-time high across the U.S. in the late 60’s, Tacoma’s Hilltop neighborhood reached a boiling point, stirring up an event known as the 1969 Mother’s Day Uprising.

“An attempted arrest on the Hilltop led to a night of angry, youthful confrontation and property destruction, the shooting of a policeman, and charges of alleged police brutality. The riot started when Tacoma police officers, Herman Knaack and Arthur Jackson attempted to arrest a black felon. When he resisted, an African American woman from a nearby house began to scream “police brutality” and soon several other black residents gathered. Gunfire erupted and Officer Knaack was wounded trying to protect his partner. A riot ensued, lasting the rest of the night.”

In the days following, emerging spokespersons and city leaders like former city manager Jim Walton, Black Collective co-chair Lyle Quasim, and former state Senator Rosa Franklin, proposed a set of demands asking for increased neighborhood services and black representation on the police and fire departments. Their demands were met and birthed the blueprint of community activism.

This summer, the Institute for Black Justice invited young-adult leaders to draw on that historic event to update the blueprint for today’s challenges and opportunities.

“The blueprint is how it all started with the legacy builders back then. It is the foundation of what they did in the aftermath of the event, and the update would be what we choose to do with the knowledge.”

Carol Mitchell, Founder of the Institute for Black Justice (IBJ), a local organization advocating for the justice and equity of Black people, explains the importance of past events to meet today’s challenges, “It is intentional that inter-generational dialogue happens while linking back to a historical moment because it sends the message to young people today that there’s really nothing new, but you can update what has always been if you know about what happened in 1969.”

Young-adult leaders got the chance to design updated blueprints as part of the IBJ ACES Design Challenge presented at the 2022 Freedom Summer Symposium in May. The symposium is a social justice “call to action,” targeting 18-35 social justice activists, and aspiring leaders. This year’s design challenges centered on the history and lessons learned from the 1969 Mother’s Day Uprising. Participants were given the opportunity to consider those lessons, with the challenge of applying them to contemporary issues updating the blueprint. 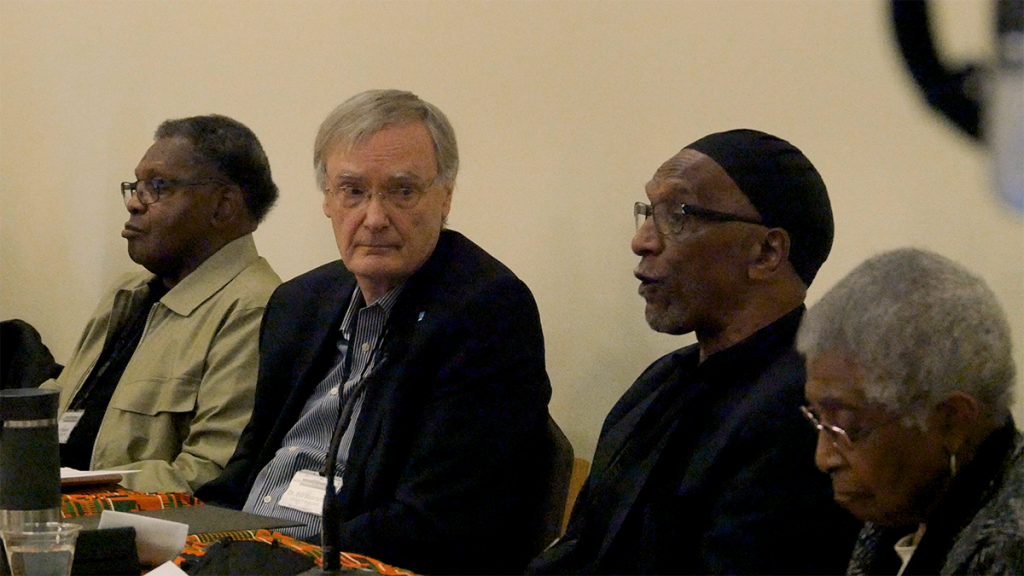 Monique Glenn is a member of the IBJ young adult leadership program – Activists Cultivating Equitable Strategies (ACES). Monique explains, “the blueprint is how it all started with the legacy builders back then. It is the foundation of what they did in the aftermath of the event, and the update would be what we choose to do with the knowledge.”

“One of the things we wanted to convey to the students and participants in this challenge was that this is not a single event but marks the beginning of a new era of Black leadership and empowerment in Tacoma.”

Monique’s design team developed a Young BIPOC Parent Support Challenge. “Our group’s focus was geared towards 18-35-year-old parents. We wanted to put together a parenting class to teach parents of color about the history that is happening around them in the Pierce County area.

“With the design challenge topic centered around the 1969 Mother’s Day Uprising, a lot of us in that age group didn’t even know that it happened until we had to do the research on it. These are vital events that have happened that have gotten our legacy builders to where they are, which could help us get to where we need to be in the future. I’m about to be a mother in three weeks, so I want to know history like this.” 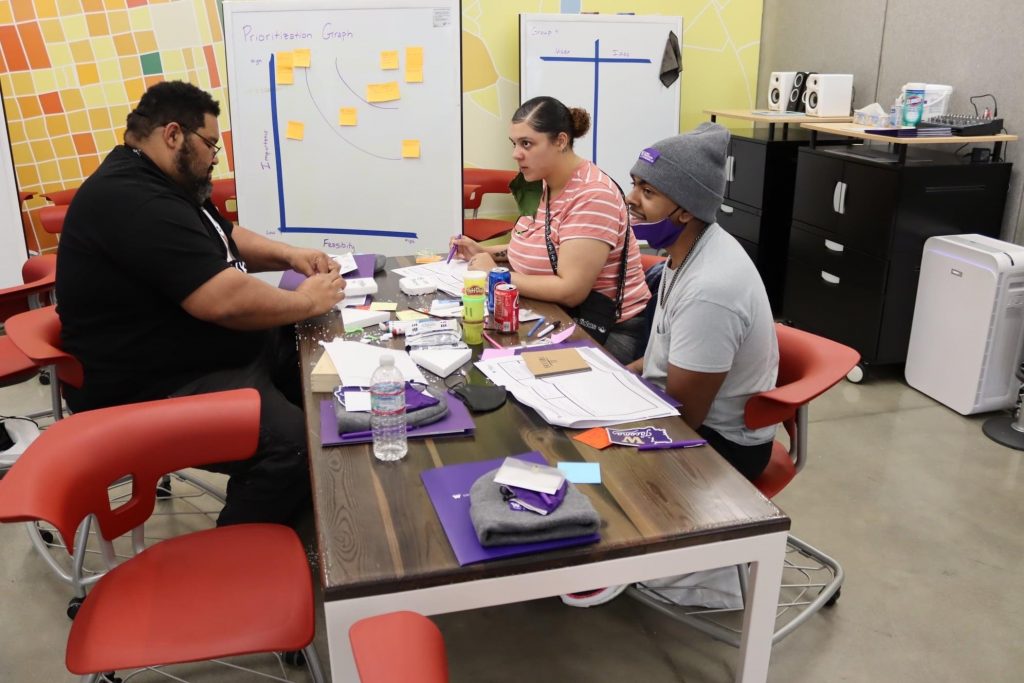 Young BIPOC Parent Support Challenge members, Ja’Quez Ross, Monique Glenn, and Ryan Wright use human-centered design as a tool for updating the blueprint for their community.

Two other design groups created their own approaches to updating the blueprint for excellence. One, the Activists Library (Activism 101) Challenge, proposed the creation of an activist media library to provide support for inspired youth activists. The other group developed the Field Day Challenge, offering community field day activities for students K-12 focused on inclusivity and links to important local historical events. All three groups worked with local professors to apply the ideas of human-centered design to develop projects that would build a new blueprint.

“It turned into something way bigger than it should have back then, because we didn’t know the kind of voice we had, and what kind of power we had, and how to use it.”

Human-centered design is a tool Carol uses throughout the work of IBJ. “The IBJ is itself a human-centered design prototype and so is the young adult leadership program, along with the symposium around it. It is always constantly evolving and is set up for feedback and learning, to be dynamic and to change and shift.”

Faculty member and Master of Public Administration Director at The Evergreen State College, Mike Craw supported the three design teams in developing updated blueprints, “One of the things we wanted to convey to the students and participants in this challenge was that this is not a single event but marks the beginning of a new era of Black leadership and empowerment in Tacoma.”

Dr. Carolyn Weisz, Psychology Professor, University of Puget Sound, another university faculty member said, “The uprising aspect helped them to understand the entrenchment of racism and the inequities, as well as the leadership development aspect that sprang up from what was going on.”

Upon diving into this history, Monique was stricken with mixed emotions as she tried to make sense of the incident. She soon found herself drawing similarities to some of today’s most painful events. “I soon learned that it was like the George Floyd incident. I was devastated to know that before George Floyd, right here a couple blocks from where I lived, something similar happened years ago, and I had family that were a part of that riot that they held that night. From what I could tell, it turned into something way bigger than it should have back then, because we didn’t know the kind of voice we had, and what kind of power we had, and how to use it.”

“Despite all of the things that are happening in the world, all of the Breonna Taylors, George Floyds, or Manuel Ellis’, your voice is needed, it is appreciated, and it will be heard.”

Supporting youth and young-adult leaders in using their voice is where philanthropy can make a big difference. Seth Kirby, Chief Impact Officer explained, “GTCF supported IBJ’s work with an unrestricted grant knowing that best enables an organization to serve its mission. GTCF is so excited to learn how the design challenge was structured and what blueprints youth leaders designed. Young people know best how to define their challenges and envision what’s possible. We know from our Youth Philanthropy Board and Whole Child work that the outcome is more meaningful and impactful when young people are engaged and resourced as expert consultants alongside long-term leaders and elders. Together, this creates incredible power to define, develop, and advance a shared agenda and purpose.”

All three design challenges presented at this year’s Freedom Symposium will progress to being prototyped and tested. Based on those prototypes, IBJ will implement the findings from the design challenges into their work and advocacy for the coming year.

With the potential implementation of the Young BIPOC Parent Support Challenge, Monique hopes that young BIPOC parents will have the opportunity of accessing their history alongside their children, while developing into the legacy builders of tomorrow.

“Despite all of the things that are happening in the world, all of the Breonna Taylors, George Floyds, or Manuel Ellis’, your voice is needed, and it is appreciated, and it will be heard. I want people to understand that, despite what kind of background you came from or how you grew up, you can become a legacy builder. Everyone that comes after you is going to follow in your footsteps.”

If you’d like to learn how your philanthropic giving can advance greater impact in your community, stronger community voice, and civic engagement, contact GTCF’s Philanthropy Team.